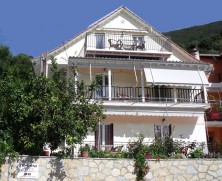 The holiday accommodation has apartments and studios ( rooms with kitchenette ) and is located on the southwest side of Lefkada ( Lefkas ), in the settlement Kolivata , near the village of Vassiliki. Our island is situated in the Ionian Sea and is known for its white beaches (Porto Katsiki, Egremni) and the picturesque villages. The famous Greek poets Aristotele Valaoritis and Angelos Sicilianos lived and were inspired by its rare beauty.

Onassis, loved it so much that he bought Scorpios, one of the small islands around Lefkas, in order to enjoy the idyllic landscape. It is an island which is the favorite destination for thousands of Greeks and foreigners, since apart from the wonderful attractions, it is easily accessible by car as it is connected to mainland Greece by a floating bridge.

WHERE WE ARE: Ermioni is located right in front of the three small, beautiful beaches of Kolivata and is 300 meters away from the picturesque harbour of Vasiliki. All the rooms and studios have balconies with stunning views over the Ionian Sea and are fully equipped.

TOURS During your vacation in our island you should get one of the several boats that depart daily from the port of our village but also from other parts of the island and enjoy its countless beauties.

No comments yet. Why not add one below?

Search in the site

Find the hotels in the place you prefer, using our dynamic map! CLICK HERE